Can Smartphone Use Bring on Carpal Tunnel Syndrome?

FRIDAY, June 23, 2017 (HealthDay News) — People who spend lots of time on their smartphones may be scrolling, tapping and swiping their way to carpal tunnel syndrome, a painful wrist and hand disorder.

A small study found a link between extended use of smartphones and other hand-held electronic devices and a greater likelihood for experiencing the telltale wrist and hand pain of the syndrome.

But the researchers did not prove that heavy smartphone use caused carpal tunnel syndrome, and one hand surgeon said very few people in the real world use their smartphones as much as the heavy users in the study did.

White is an assistant professor in the department of health technology and informatics at Hong Kong Polytechnic University.

The carpal tunnel is a narrow and hard pathway of bone and ligament found at the base of the hand, according to the U.S. National Institute of Neurological Disorders and Stroke. It contains tendons, which enable finger-bending, as well as the so-called “median nerve,” which runs from the forearm to the palm and provides feeling to some fingers.

Carpal tunnel syndrome can gradually develop following repeated pressure to the point where the median nerve passes into the hand and meets the wrist.

A common cause, said White, are work conditions that call for “repetitive, forceful or awkward hand movements, for example, when typing.” And the result is often pain (sometimes extending up the arm), numbness, finger tingling and weakened grip strength.

To explore whether smartphone use might up the carpal tunnel syndrome risk, White and his associates followed up on their prior investigation involving 500 Hong Kong University students.

More than half (54 percent) of the intensive group reported musculoskeletal pain and/or discomfort, compared with 12 percent among the less intensive group.

The new study looked at 48 students from the first study. Half were intensive users who spent (on average) more than nine hours a day using their devices. Those in the other group spent just under three hours a day on their devices.

The participants answered questionnaires on electronic device habits and any pain or discomfort in their neck, shoulder, back, elbow or wrist/hand region.

Ultrasounds and physical exams on the wrist region were also done.

Muscle pain was found to be more common among intensive users.

The researchers also found that intensive electronics users had “significantly” more discomfort, and more severe discomfort, in their wrist and hand.

The more time a person spent using a hand-held electronic device, the more intense and long-lasting their wrist and hand pain was.

To explain why, the researchers pointed to device design, which requires the repeated use of fingers to click, swipe, scroll, tap and press. The result is an enlargement and flattening of the median nerve, alongside bulging of a key ligament.

To minimize risk, White advises keeping the wrist as straight as possible when using devices.

He added, “One should try to minimize repetitive movements of one’s fingers and thumb when using hand-held electronic devices, especially for single-hand use. It is also important to take regular rest periods, so as to avoid continuous intensive use, so as to allow recovery time and to prevent prolonged stress.”

But hand surgeon Dr. Dori Cage questioned how much of a risk smartphone use really poses.

“The strong correlation of carpal tunnel syndrome with smartphone use is surprising, as I have not seen that in my practice,” said Cage, an American Academy of Orthopaedic Surgeons spokesperson.

Cage, who’s with San Diego Hand Specialists, also suggested that “it is unlikely that the general population would have [the] degree of phone use” seen among the intensive users in the study.

“This is likely an issue affecting only a small percentage of cellphone users,” she said.

The study was published June 21 in the journal Muscle and Nerve.

What is carpal tunnel release surgery?

The median nerve and tendons that allow your fingers to move pass through a narrow passageway in the wrist called the carpal tunnel. The carpal tunnel is formed by the wrist bones on the bottom and the transverse carpal ligament across the top (or inside) of the wrist. When this part of the body is injured or tight, swelling of the tissues within the tunnel can press on the median nerve. This causes numbness and tingling of the hand, pain, and loss of function if not treated. Symptoms usually start slowly, and may get worse over time. They tend to be worse on the thumb side of the hand. 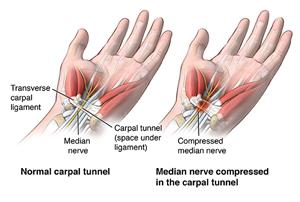 During a carpal tunnel release, a surgeon cuts through the ligament that is pressing down on the carpal tunnel. This makes more room for the median nerve and tendons passing through the tunnel, and usually improves pain and function.

A diagnosis of carpal tunnel syndrome is about the only reason to have a carpal tunnel surgery. And even then, your doctor will likely want you to try nonsurgical treatments first. These may include over-the-counter pain medicines, physical therapy, changes to the equipment you use at work, wrist splints, or shots of steroids in the wrist to help relieve swelling and pain.

The reasons that a doctor would recommend a carpal tunnel release surgery may include:

What are the risks of carpal tunnel surgery?

As with most surgeries, carpal tunnel release is not without its risks. Your wrist will be made numb and you may be given medicine to make you sleepy and not feel pain (called local anesthesia) for the procedure. In some cases general anesthesia is used, this when drugs are used to put you into a deep sleep during surgery. Anesthesia poses risks for some people. Other potential risks of a carpal tunnel release surgery include:

The recovery from carpal tunnel surgery takes time – anywhere from several weeks to several months. If the nerve has been compressed for a long period of time, recovery may take even longer. Recovery involves splinting your wrist and getting physical therapy to strengthen and heal the wrist and hand.

There may be other risks, depending on your specific medical condition. Be sure to discuss any concerns with your doctor before the procedure.

How do I get ready for carpal tunnel surgery?

Based on your medical condition, your doctor may request other specific preparations.

What happens during carpal tunnel surgery? 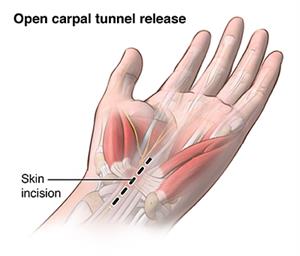 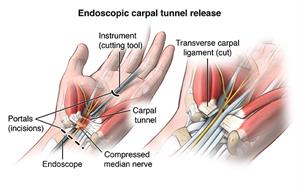 In either case, here is the general sequence of events in a carpal tunnel release surgery:

Once the surgery is done, you’ll be monitored for a short time, and then allowed to go home. Only in rare cases or complications is an overnight stay needed for a carpal tunnel release surgery.

What happens after carpal tunnel surgery?

Your wrist will likely be in a heavy bandage or a splint for 1 to 2 weeks. Doctors usually schedule another appointment to remove the bandage or splint. During this time, you may be encouraged to move your fingers to help prevent stiffness.

You’ll probably have pain in your hand and wrist after surgery. It’s usually controlled with pain medicines taken by mouth. The surgeon may also have you keep the affected hand elevated while sleeping at night to help decrease swelling.

Once the splint is removed, you will likely begin a physical therapy program. The physical therapist will teach you motion exercises to improve the movement of your wrist and hand. These exercises will speed healing and strengthen the area. You may still need to sometimes use a splint or brace for a month or so after surgery.

The recovery period can take anywhere from a few days to a few months. In the meantime, you may need to adjust job duties or even take time off from work while you heal. Your doctor will talk to you about activity restrictions you should follow after surgery.

Let your doctor know about any of the following:

These problems may need to be treated. Talk to your doctor about what you should expect and what problems mean you need to see your doctor right away.

Before you agree to the test or the procedure make sure you know: